I was counting my weeks on Fridays.  The doctor’s office was counting my weeks on Mondays, and they were a little bit ahead of me. So, since we’re getting close, I’ve decided to get in line with how they are counting. Normally, I would have said I am 34 weeks tomorrow, but by doctor’s office calculations, I was 34 weeks this past Monday. So, we’re calling this photo 34.5 weeks. 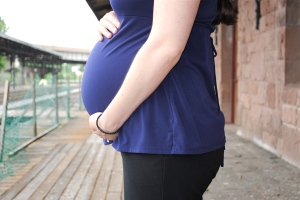 I still can’t believe there is a baby in there, even though I feel her move a lot and she gets the hiccups a couple of times a day most days.  They said her head is down, but that she’s kind of diagonal.  Her head is near my left hip and she seems to like to poke me in the ribs on the right side.  I go back to the doctor in about 2 weeks, and then it’s every week after that.  It’s weird to think that she’s “due” 5 weeks from Monday, and she could be as early as 2 weeks, so she could be here in 3 weeks!  Wow!  This seems like it was such a long time ago.

This entry was posted in Fetus Ford. Bookmark the permalink.

4 Responses to How Many Weeks?