In 2007, we ran into lots of trouble flying home to Florida for Christmas (missed connection in DC, 5 hours in line, 4 hours at hotel, plane tickets on another airline purchased by dad, arriving 3 hours away from home about 5 hours before engagement party thrown in our honor).  In 2008, (with memories of 2007), we decided to stay in CT for the holidays.  This year (2009), we decided to drive.  We hadn’t been to WPB since September 2008 (1 year and 3 months!) – it had been too long.  We hadn’t seen our nieces in over a year and I had a new cousin to meet (Maddock!).

So, this year we decided to drive down.  Christmas and New Years fell nicely on Fridays, so I only had to take a few days off to be out of the office for several days.  We left on Tuesday after work, and arrived home at 3am on Wednesday night (Thursday).  We spent one night in a hotel and Izzie (despite us having had a miscommunication and not bringing her crate) did very well not only in the car, but also in the pet-friendly hotel.  We spent almost a week in West Palm Beach, and then slowly worked our way back to CT.  We stopped to see Roger, Beth, Ben, Kristen and Matt in Gainesville, Florida.  Izzie got to play with her cousins Major and Cooper.  For New Year’s Eve, we stayed with Ryan’s brother Jack at his new house near Atlanta, GA.  Next we headed to Winston-Salem, NC to stay with Ryan’s best friend (and our best man!) Dave and his wonderful wife Amy.  Finally, after one night in a hotel in Virginia, and quite a scary, snowy, long drive through the mountains in PA, we arrived home.

I got a new camera for Christmas, but of course took hardly any photos, except of the dog. 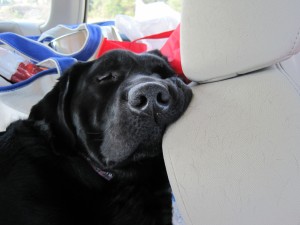 Are we there yet?

This entry was posted in Family, Florida, Travel. Bookmark the permalink.