Thanksgiving was kind of nuts this year. First, a snowstorm was projected to hit us on Wednesday. My cousins and their kids from Florida missed their flight on Tuesday morning. They finally arrived but late Tuesday night and drove right to New Hampshire from Boston. R and I (mostly me) hoped and hoped optimistically that school would be cancelled on Wednesday. It was only a half day and it was supposed to start snowing by mid-morning. I planned for us to leave Tuesday night in case it was cancelled. No cancellation Tuesday, no cancellation Wednesday and I was just flat out pissed. So we had to wait until Thanksgiving Day to drive to New Hampshire. They had gotten over a foot of snow. We left at about 6:30am and the traffic was amazing – we made it in 2 hours and 15 minutes. When we arrived, most of the town did not have power. Luckily my aunt and uncle did. The condo of a friend of theirs where some of my family was going to stay did not, so we planned to all snuggle in at their house. There were 15 of us including the kids. Thanksgiving was absolutely wonderful. M even played her violin for everyone! 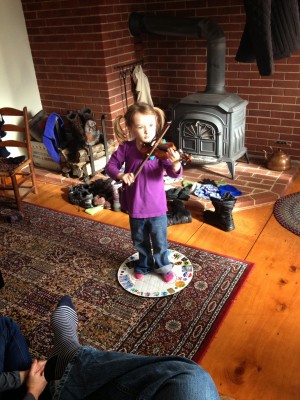 We had a great meal served in their “barn.” Just as we were eating pie the power went out at their house. They are on a septic system, so we had limited flushes and of course no showers or lights. Luckily the house is heated exclusively with a wood stove. The barn however is not and we switched out who would sleep out there, swapping the native Floridians with those from Maine and New Hampshire. My family slept in Rick and Ginni’s room. Still no power the next day. We built towers with blocks, played in the snow – building snow forts and snowmen, making snow angels and sledding – and visited my Aunt’s family’s dairy farm. We saw the cows being milked and a pregnant cow in labor.

On the second night, the condo had power, so a few of us took the kids over for a bath and a movie. 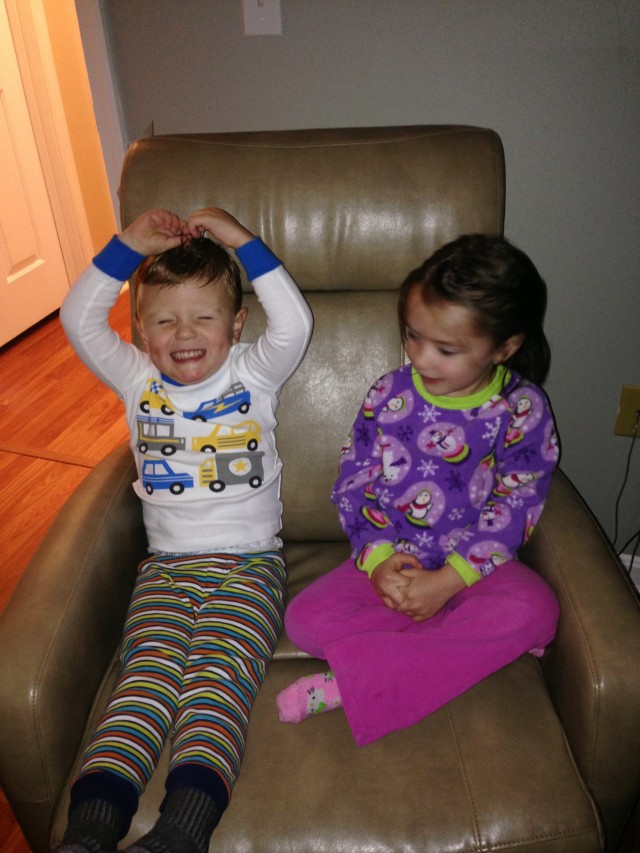 S was very interested in her new cousin, but in the end the only photo I got was one of M and her 3 1/2 month of cousin M. 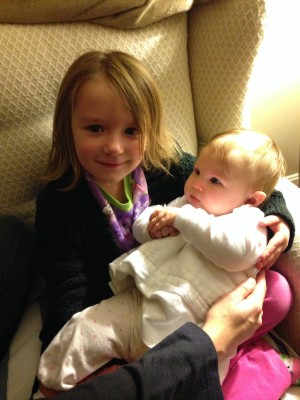 My cousin Amy and I both ended up getting the stomach bug, but at least I made it home before it got me. And luckily she was staying at the place with a shower, lights and a woking toilet when it got her.

It was a wonderful time spent with lots of family that we don’t get to see very often. Such a wonderful holiday!

This entry was posted in Family, Miss M., Miss S.. Bookmark the permalink.