Izzie had her two year checkup on Friday.  We were pleasantly surprised to learn that the bonding on her teeth has held up. (She has no enamel on her teeth naturally.)  The sealants were first put on two years ago and had to be nearly completely redone last year.  Since last year, we’ve taken away the tennis ball and the racquet ball, so now she’s only allowed soft plush toys.  This seems to have done the trick!  However, she did have two teeth they flagged last year to watch for this year, as well as three additional problem teeth this year. Instead of performing root canals, they removed the five problem teeth.  We only got a brief look as she was yawning, but her chart tells me that they removed one of the front top teeth and four of the bottom front teeth.  She had already had her canines and most of the teeth around them removed, so besides a couple of molars on each side she only has one tooth left visible on the bottom.  Poor puppy!  She’ll be taking probiotics, antibiotics and pain pills for 2 weeks, wearing the satellite dish collar for 3 weeks, eating wet dog food and chicken broth blended until smooth for 4 weeks and then eating dry dog food soaked in water for an additional 60 days.  She was pretty out of it her first night home, but other than being tired from the pain pills, she’s doing just fine!  She is such a trooper, such a wonderful dog.  And surprisingly enough we aren’t having any issues with M and the dog’s huge satellite dish collar.  Izzie has only bumped her with it once, and she was so gentle.  We’re probably lucky M isn’t walking yet or she’d be getting knocked over like crazy! 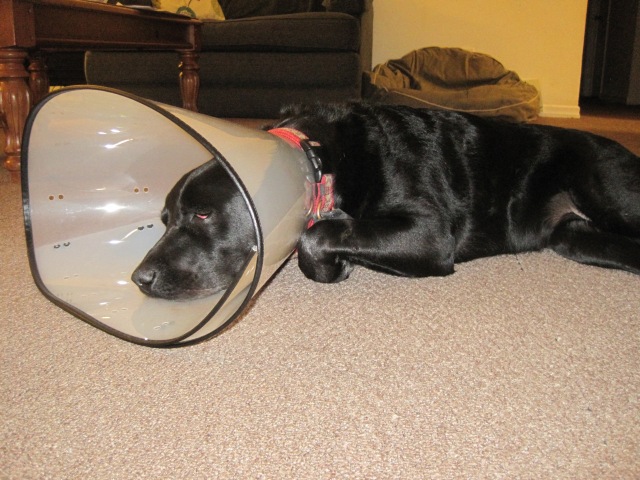 This entry was posted in Izzie. Bookmark the permalink.