Let’s be honest – I totally stole the title for this post and the idea from a good friend.  Her post was so nicely written that I could just picture the places she’d lived, and it really made me think about the lovely places I’ve lived, each with its own set of memories.  I only hope I can express my memories as well as she did.

Disclaimer:  Turns out I have lived a lot of places, and this post is super-duper long.

The first place I ever lived, and the place that I will always call home is my parents’ house in Florida.  They lived there when I was born, and they still live there.  It’s a typical Florida home, one story and very open.  They have sliding glass doors that open out onto a patio with a half in/half out of ground pool.  On any given day, you can feel the breeze blow off the lake into the house and hear the sound of my dad’s many wind chimes.  Wind chimes always make me think of home.  There’s a small airport across the canal so the sound of small planes also always makes me think of home.  I have memories of watching the summer rain showers come across the lake toward our house and it would be raining in the backyard just before it’d be raining in the front yard.  I remember thinking Florida was so hot you could fry an egg on the pavement, and I tried it (unsuccessfully) more than once.  I also remember thinking when it got cold there that it was really cold, and if the weatherman mentioned we might have a freeze, I would put out a cup of water or something in hopes of seeing it frozen the next morning.  I don’t think this was every successful either.

Next I was off to college and the dorms of the good ol’ University of Florida.  I spent the first 6 weeks of summer before my freshman year in a single room on the 4th floor of Sledd Hall.  I didn’t realize how good I had it.  The room was small, but cozy and the building was old and quaint.  The floor was girls only, but one of the girls had her boyfriend staying with her, who happened to also be a teacher from her high school.  I remember thinking this was weird, but not nearly as weird as I think it is now.  It was here that I met Sharon, one of my best friends to this day.  I also lived in Sledd during the first half of my freshman year, but moved to one of the Beaty Towers after Christmas.  The reason the room was open was pretty sad.  There had been a car accident after Thanksgiving and two students had been killed.  One of those students lived in this room, and her roommate either dropped out or moved rooms after that, so there were two beds open.  Sharon and I were happy to live together, but sad about why it was possible.  This dorm had two bedrooms with two people each (4 total) who shared a kitchen and a bathroom.  Sharon and I got a turtle and named him Raul.  It was in this room that Sharon’s boyfriend at the time used our Ethernet connection to download tons of music from some website I had never heard of called Napster.

In the summer between Freshman and Sophomore years, I lived alone in a sublet apartment above a garage within walking distance of campus.  For the first time I had dishes, a bed, and furniture of my own.  I even got a cat (which I still have).  I loved this little place, even though it had a shower so small I had to practically kneel to be in the water.

During my Sophomore year, Sharon and I lived together at A.P. Apartments.  I worked across the street in the bakery at Winn Dixie.  The apartment was nice enough and we each had our own bathroom, but we were located right near the clubhouse, which they loved to rent out for a $500 deposit to anyone, not just residents, and return if there was no damage.  So basically, you could have a party there for free.  Party goers loved to pee in the dryers.  We also had some lovely neighbors above who introduced me to the sub woofer.  At one point Sharon hung a sign on her window facing the pool (which the complex loved to show off to prospective residents) saying “I HATE A. P.”  Needless to say, we were asked to remove it, or move out.

I lived alone during my Junior year, and loved it.  I still lived within walking/biking distance of campus.  Again, I had a neighbor who liked to throw parties, and had the nickname Scotty-too-Hottie.  I remember wondering what the deal was, because he never drove anywhere, and his parents always delivered his groceries.  Once I found a plastic bag of ‘sandwiches’ on my doorstep.  Another time one of his drunk underage friends ran into Ryan’s car and they paid us $500 not to call the cops or our insurance.  I think my cat saw dead people in this apartment, because she’d always look just past you and put all her hair up – creepy.  It was while I was living in this apartment alone and R was living alone in a mini-studio-house that he brought up the idea of living together.  It was so cute – we were out somewhere and he drew the floor plan of this house he’d found on a napkin for me, and talked about how we could set it up.  I was over the moon and I think I still have that napkin.

This place was by far the most memorable place we’ve lived, and not just because it’s the first place we lived together.  The house was an old crack house that had been abandoned and then remodeled (although we agreed to rent it before the remodeling really started).  All the original wood floors and ceilings had been restored.  It was a shot gun house, meaning you could shoot a gun through the front door and all the way through to the back door.  And someone did shoot in that front door once – there was a bullet lodged in the door.  Ryan had his own music room, and we had a cozy little bedroom in the back with only enough room for a bed and a nightstand.  It had tiny little windows all around and a slanted tin roof that sounded so wonderful when being hit with rain.  We had a perfect front porch that you could lounge around on.  We had the most wonderful neighbors, G & G, who we are still friends with to this day.  The neighborhood was a little less than desirable, but it was a really fun (within walking distance of all the bars, concert venues and the downtown arts festivals) and eclectic place to live at that time in our lives.

First we lived in a beautiful old mill where velvet was made that was remodeled to be apartments after being abandoned.  Our apartment was huge and had cathedral ceilings with two story windows.  Again, the walls were thin and the neighbors were bad.  I don’t think I am made for apartment living.  But, it was here that we experienced our first New England snow storm (which are eerily quiet compared to Florida storms!).  Our ritual during and after snow storms was to put on our boots and hike down the hill to the grocery store to get stuff for nachos. 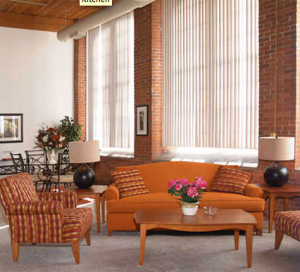 Not our actual apartment

This entry was posted in Blogging, Life. Bookmark the permalink.